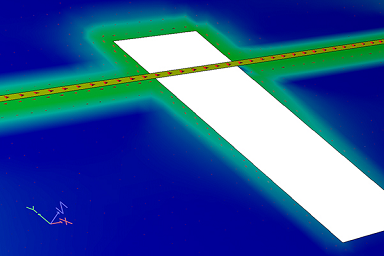 How to Design Your PCB Return Current Path

Your PCB current has to return somewhere. In reality, the current in your electronics does not actually "flow" like water through a pipe. Instead, the electromagnetic field between traces and a ground plane will be confined within a particular region in your board, and this level of confinement depends on the signal frequency and board stackup.

Simply put, the geometry of your traces, signal frequency content, and layer arrangement will determine your PCB return current path. The signal itself will, in some ways, choose its own return path. However, with some basic design guidelines, you can ensure the return current does not pass through a region where it could cause interference in other circuits. Once a designer understands how signal characteristics influence the return path, it becomes easier to design an intended return path for signals without resorting to electromagnetic field solvers.

A PCB return current path is determined by the impedance between a signal trace and the impedance of the circuit that carries the return current. Current in a PCB flows from the power supply, to downstream components, and from outputs to further downstream components. Along the way, current is induced in the reference plane and propagates back to the ground return point.

We like to think that current ‘flows’ along this circular path, although this is not really correct. This picture of flowing electrons is convenient for visualizing the distribution of current in a PCB, but it leads to incorrect explanations of circuit behavior; a prime example is in right-angled PCB traces. In reality, the return current for a propagating signal depends on the frequency and associated impedance seen by the signal as the electromagnetic field propagates along an interconnect.

Return path as a function of frequency. Left: 1 kHz, Right: 1 MHz. These images can be found in Resistive vs. Inductive Return Current Paths by Bruce Archambeault. You can read more about the influence of parasitics in your PCB in this article.

Why is there a difference in PCB return current path behavior? If you remember your electronics 101 class for a moment, the impedance of a circuit can be split into resistive (independent of frequency) and reactive (dependent on frequency) contributions. In reality, real circuits on a board should be modeled, at minimum, as RLC circuits; this is the standard approach with transmission lines. This is the case for any circuit, even if said circuit does not contain capacitors or inductors.

Because conductors are separated from their ground return path by an insulating substrate, there is always some parasitic capacitance. Parasitic inductance arises because all circuits form a closed loop of conductive material. These parasitics and the natural DC resistance of conductors contribute to the impedance seen by signals as they travel throughout your board. This means the path the return current must travel in a real board will have some capacitive and inductive contribution in series with a resistive contribution. 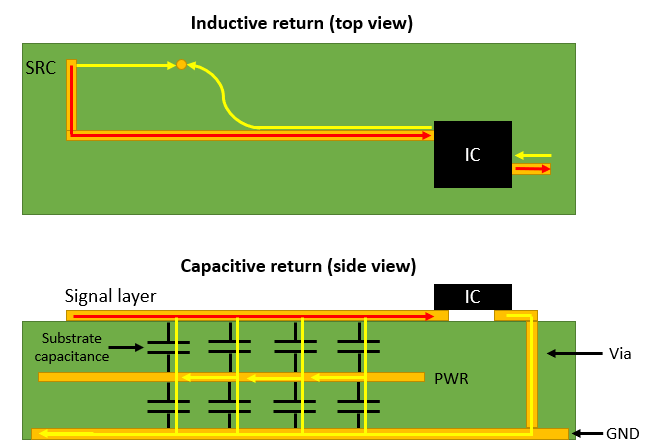 The return current path in a PCB is not something to be deliberately designed at every frequency. Instead, some simple stackup and layout choices will determine whether you can properly direct the return path in your PCB such that there is no interference between signals.

If you look at the examples with inductive and capacitive return paths above, you’ll see that the use of an adjacent ground plane is the best way to provide a predictable return path. Otherwise, your signals will try to couple inductively or capacitively back to the nearest return plane. This then can cause interference as the return current path establishes itself between power, signal, and finally ground layers. Instead, provide an adjacent ground plane for return signals to prevent unintended coupling.

When I say "section," I am not talking about cutting a ground layer into two pieces and then routing signals over the gap (don’t do this!!!!). I simply mean arrange analog components with each other in one region of the board, and arrange the digital components together in another region of the board. The goal is to prevent the digital signals from travelling beneath the analog region and causing interference. 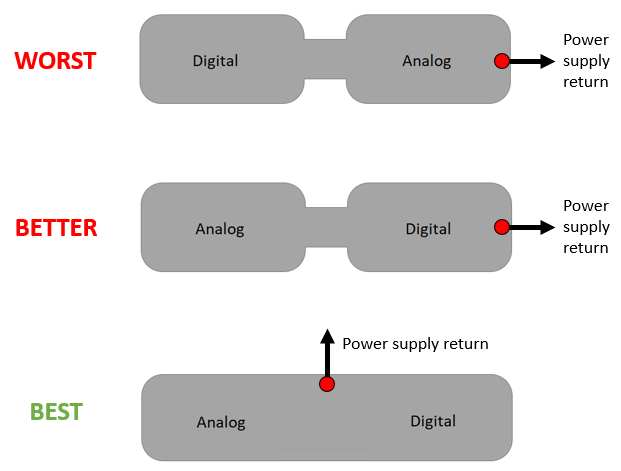 Smart floorplanning can prevent interference between analog and digital sections of your board.

Planning a PCB return current path can be difficult, but working with an experienced design firm can be a huge help when designing advanced new products. If you’re looking for a knowledgable firm that offers cutting-edge PCB design services and thought leadership marketing services for electronics companies, contact NWES for a consultation.

Ready to work with NWES?
Contact us for a free consultation.